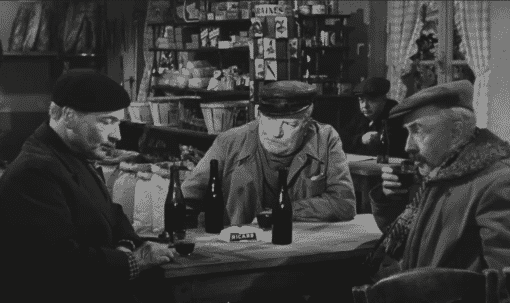 Les Vieux de la Vieille is a lovely little restaurant in Apremont with a peculiar name that doesn’t translate very well into English.  Literally, it translates as ‘The old of the old’, but is in reality ‘The Old Guards’ and comes from a classic French comedy, in black and white, released in 1960.

Retired from the SNCF, Baptiste Talon returned to Vendée in his native village of Tioune (Apremont) to meet two old friends: Jean-Marie Péjat and Blaise Poulossière. He tells them that he has decided to go to the hospice in Gouyette. Jean-Marie Péjat, cycle repairer and old bachelor, decides to accompany him after an incident during a snail festival where he realized that he was no longer very young. Blaise Poulossière, a former pig breeder living in his family now run with an iron fist by his son, also decides to join them.

And here are the three friends who left on the road with their bags and their basket of wine, for a trip punctuated by many adventures. But, once at their destination, disappointed by the austere atmosphere that reigns in the hospice run by the sisters, they have no other plan than to return to the village. Having succeeded in fleeing Gouyette, they return to the village but are severely lectured by the mayor, who nevertheless accepts their return on the condition of being wise. How long will these incorrigible ganaches, always on the lookout for a good joke, be wise?

The film ‘Les Vieux de la Vieille‘ can be found on YouTube and the Internet Movie Database.

The restaurant can be found in Apremont.

Trios of old chaps can be found drinking in bars throughout France.

The preceding blog focuses on the restaurant, and it’s only 6 km from La Petite Guyonnière. So the next time that you visit Apremont stop by Les Vieux de la Vieille, you won’t be disappointed.