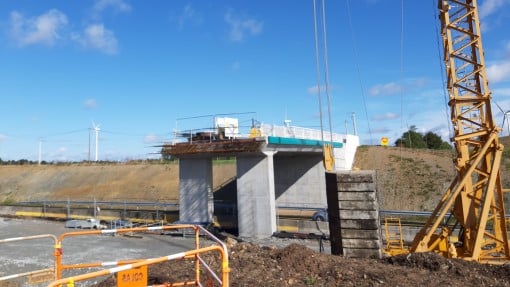 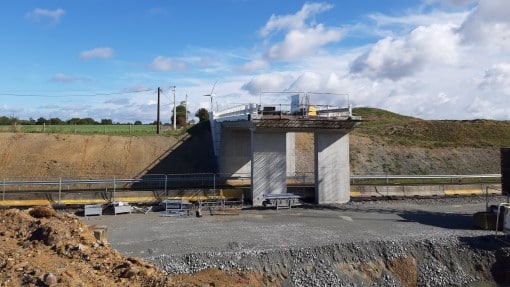 There has been an ongoing roadworks project on the D948 for nearly 3 years, and now it is our turn to benefit from this massive road improvement scheme. The final outcome will see the D948 between Challans and La Roche-sur-Yon being upgraded to dual carriage throughout its length.

Earlier this year, the southbound section of the viaduct, over the lake at Maché, was opened and the northbound section began 4 months ago. At the same time, the construction of a bridge was started, which, when complete, will join the road from La Petite Guyonnìere to a new service road on the far side of the D948. The photo shows the half-built bridge, with work beginning on the new section. The site is pretty noisy at the moment, but thankfully we are far enough away that it is no more than background noise.  So glad we don’t live at Le Fougerais, which is only 50 m from the site and the D948.

What does this mean for us, well not a lot at the moment, except that we can no longer join the D948 via Le Fougerais?  Instead, we have to use the Maché turning, which is no real problem but has confused visitors who are used to arriving via Le Fougerais. Hopefully, the new section will be complete before the start of next year’s holiday season so that our guests are not inconvenienced. The map on our website shows the quickest route into La Petite Guyonnière for the time being. Watch this space for an update once the bridge is complete and the roadworks project is finished.